I have written for journals, newspapers, magazines and websites. Background: Entertainment columnist with my own byline "Art & Stage," featuring the arts; hiking column on Hawaii.com; columns in military papers about adventure; interviewed celebrities from the U.S Women's Soccer team captain to features on the Hawaii Five-0 crew; numerous stories on culture and the arts for Hawaii hotel and visitor magazines; travel stories for Go! airlines. 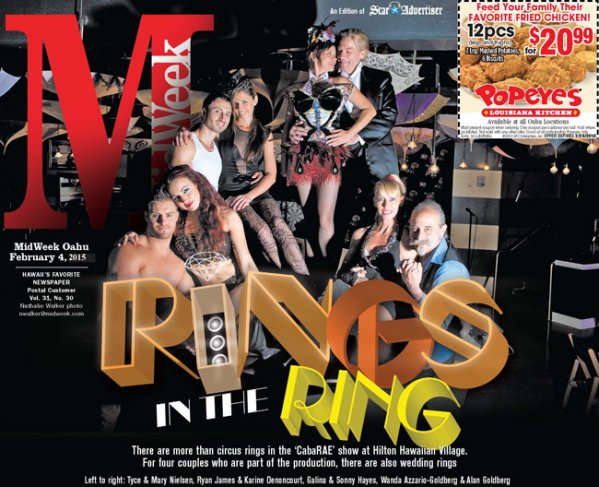 Rings In The Ring

There are more than circus rings in the ‘CabaRAE’ show at Hilton Hawaiian Village. For four couples who are part of the production, there are also wedding rings
Whenever in the history of human bonding the expression was coined, “Love makes the world go round” — that astute observer must have witnessed the splendiferous passion of circus performers. Chiseled men suspended from ropes far above ground, wielding sinewy lasses into an impossible series of buckle-me-into-my-seat poses, with no net... 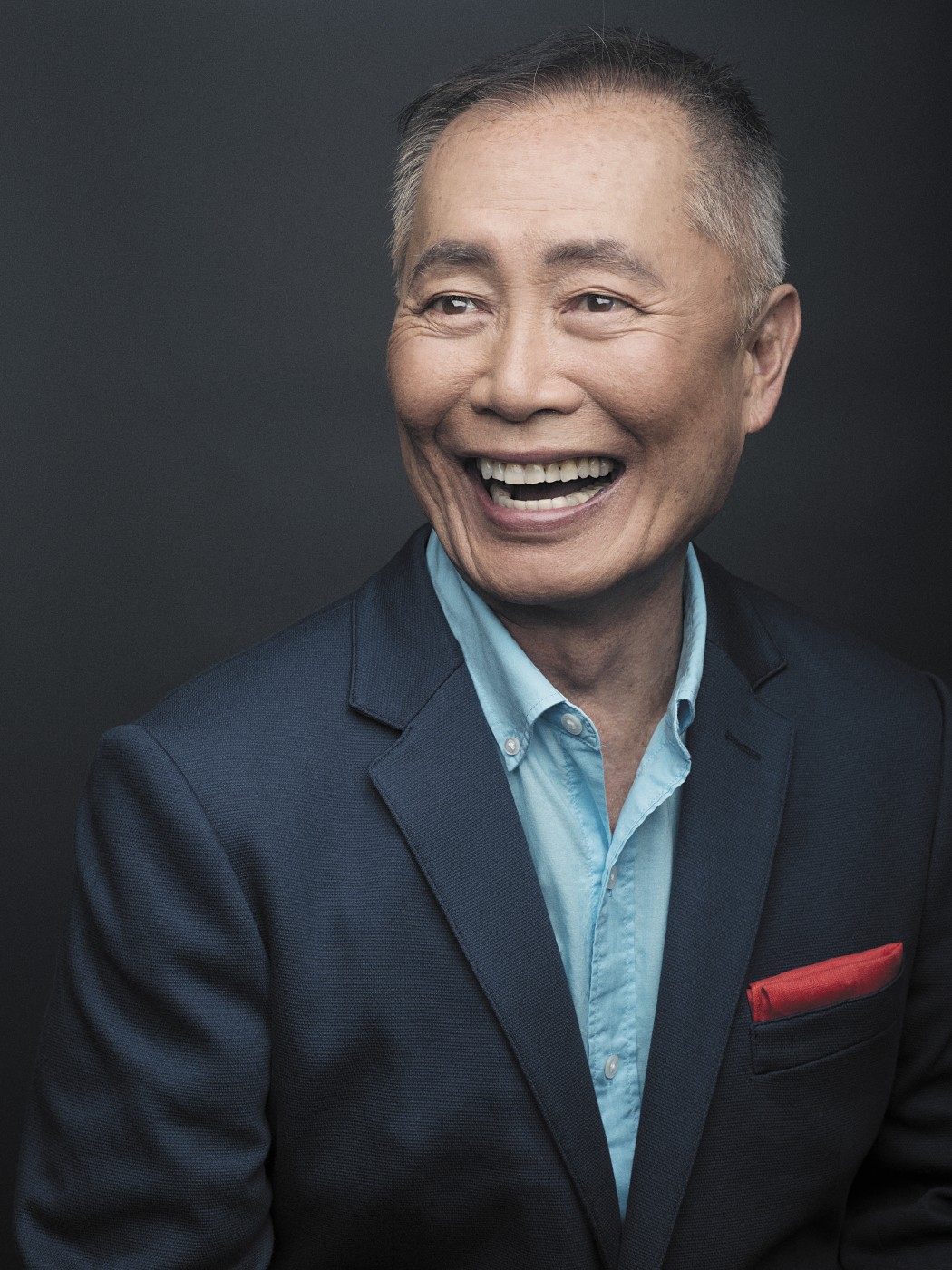 ‘Only dumb actors invest in their own projects,’ says the legendary George Takei. ‘Well, I must be a dumb actor because I have a lot in Allegiance,’ a play based roughly on his family’s internment camp experience during WWII. Led by Dr. Mark Mugiishi, more than 100 Hawaii investors chipped in at least $25,000 each to produce the show that is due to open on Broadway in the fall, and which Takei says must come to Hawaii
Call him resilient. Call him a political activist, a social justice champio... 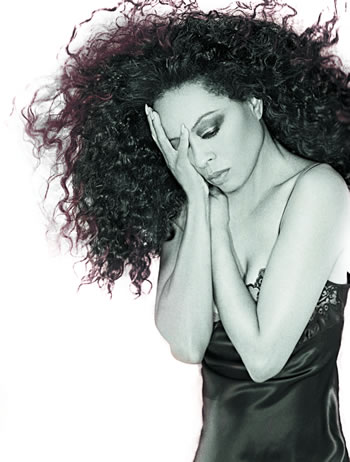 There ain’t no mountain high enough to keep us from seeing the legendary Diana Ross when she makes her first Hawaii concert appearance at Blaisdell Arena. Expect it to be one shining moment — make that two, as she’ll perform June 12 and 13.
Maybe it’s the abundant tresses of goddess hair, maybe the classy way she carries herself, or her large, liquid eyes. Maybe it’s the way those sultry gowns highlight her curving figure. Or maybe it’s that silken voice that has soothed and stirred the heart... 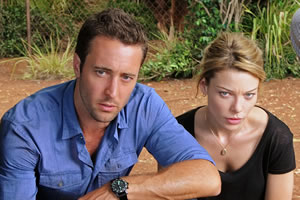 In a world exclusive prior to season two, Daniel Dae Kim, Scott Caan, Alex O’Loughlin and Grace Park talk with MidWeek about themselves and the show. The first episode, says O’Loughlin, is ‘really good’
In a world exclusive, the stars of the hugely popular Hawaii Five-0 - it’s in 200 markets - talk about themselves and the second season
Last time we saw the Hawaii Five-0 team, things weren’t looking good. Kono was arrested for stealing $10 million from the evidence locker. McGarrett has been ... 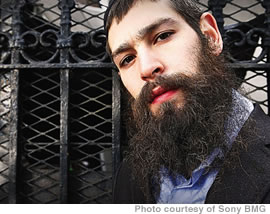 Lyrics about singing to God songs of love and healing normally do not make a hit record, but with a reggae beat it works for Matisyahu
He’s bespectacled, bearded and dressed all in black. There’s something hypnotic about his song, the sincerity and determination in his young, yet wise, face, his energetic dancing across a graffiti-covered rooftop. You feel compelled to jump right in and join him.
Take a stand
Fan a fire for the flame of the youth
Got the freedom to choose
You better make the ... 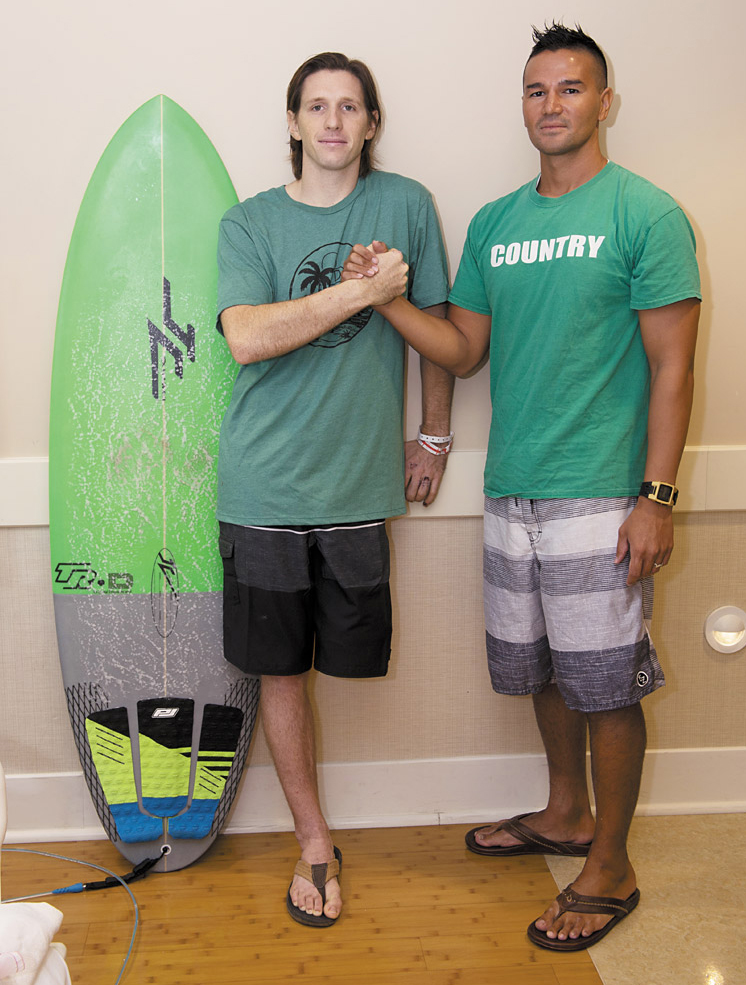 A week after Colin Cook’s encounter with a 13-foot tiger shark, his dad Glenn, who lives in Rhode Island, is matter-of-fact as he recounts Colin’s ordeal. Until he gets to the fateful call:
“Listen, your son was attacked by a shark.”
Dad wipes tears from his cheeks as he describes falling to his knees, and then receiving a second call. It was Colin in the back of an ambulance, borrowing the EMT’s phone.
“Dad, don’t worry. I’m all right.”
When Colin and hero-friend Keoni Bowthorpe start sharin... 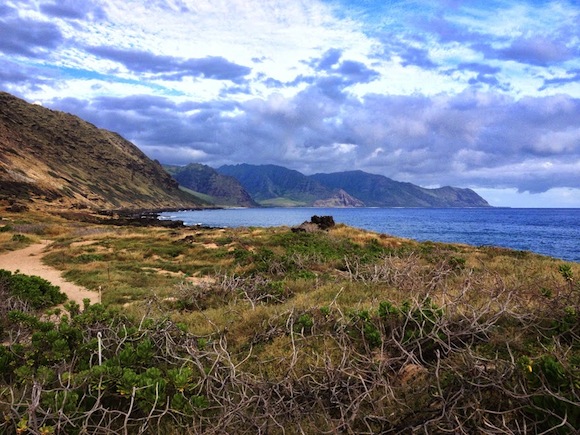 A trip to the westernmost tip of Oahu is like a visit to the ends of the earth. The area is called Kaʻena Point and because it’s so remote and only accessible by foot, the flora and fauna is much like that of the pristine northwestern Hawaiian Islands known as Papahanaumokuakea. Try saying that three times fast! Or don’t, because out here nothing is hurried. Time slows even as you drive to this part of the island. Once you step onto the dirt road that leads to the preserved tip of Kaʻena, it’... 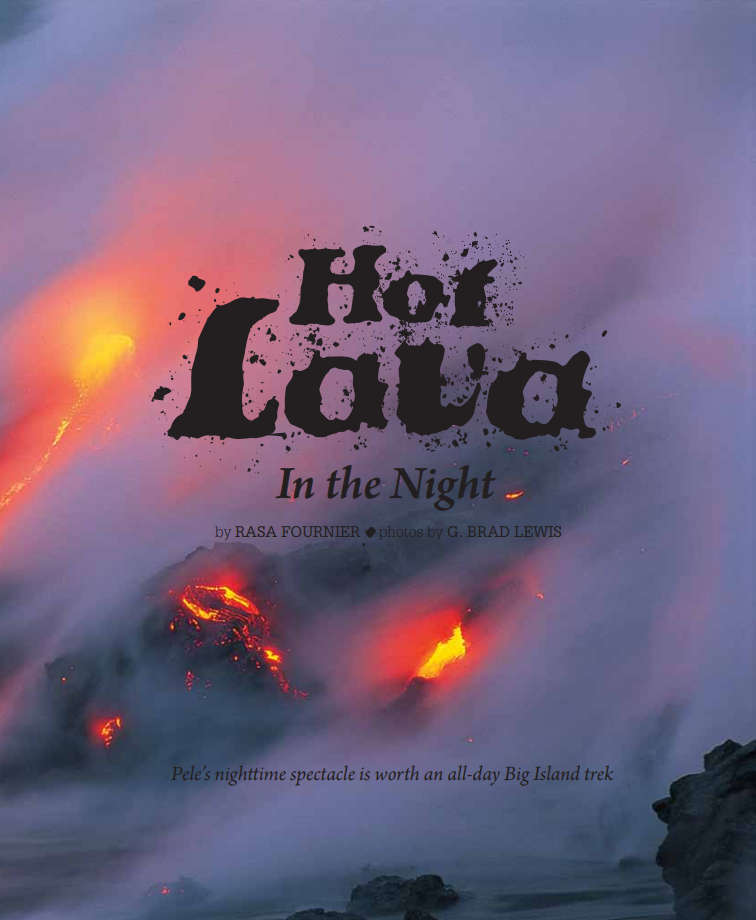 Hot Lava in the Night

I've trekked to Machu Picchu; I've sailed the Amazon and I've whitewater rafted in Nepal. But nothing in my life has compared o the experience of watching the molten lava flow at Hawaii Volcanoes National Park.
I had heard the six-hour round-trip trek described as mentally and physically strenuous. To prepare for it, my Brazilian friend, Vini, and I studied the park's website and brought necessary items, like a compass and flashlights. On the big day, we armed ourselves with hats, sunglasses, sunblock, bottles of water, energy bars, a first aid kit, gloves, binoculars, flashlights with extra 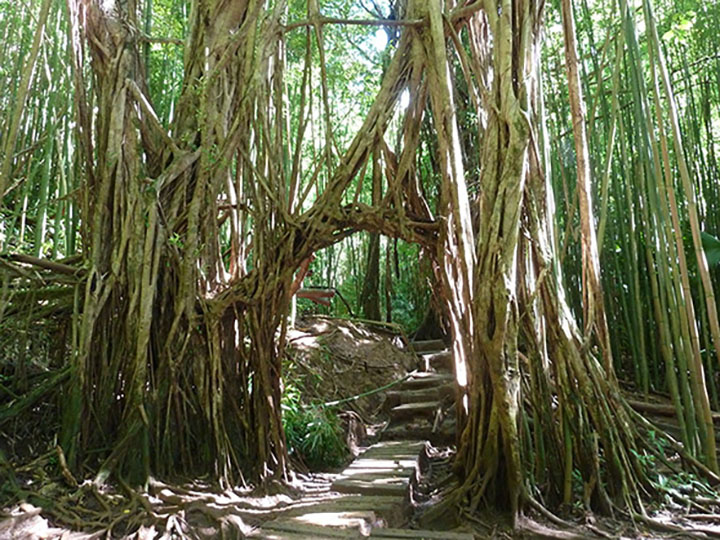 As a kid in the late 70s, before hiking in Hawaii was quite the popular pastime it is today, I’d run barefoot along a thin trail through dense bamboo jungle and emerge at a towering waterfall where I’d promptly hop into its shallow pool, not another soul in sight. In the following years, because of its proximity to town and its relatively easy terrain and short length, Manoa Falls Trail became heavily populated with hikers and tour groups that trudged through the pristine rainforest, eroding ... 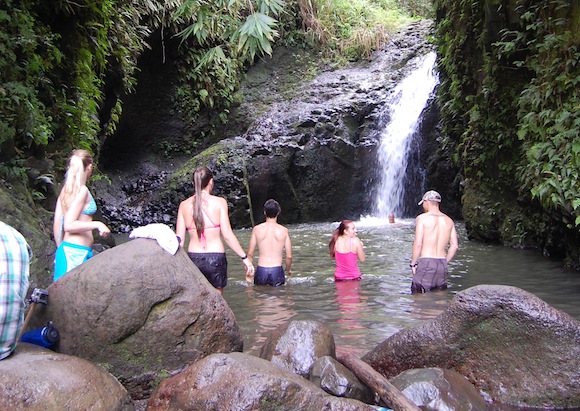 “Show me a waterfall!” is the recreational battlecry of many a visitor to Oahu. After all, tropical paradises are synonymous with rainbows and waterfalls. Oahu does boast plenty of rain-fed, spurting beauties, but unlike some of the other Hawaiian islands, none of them offer drive-up viewing. A thorough deluge will leave the Ko‘olau range awash in a spectacle of gushing cascades, but to actually submerge in a fall-fed, cool mountain pool, the most accessible is Maunawili Falls. Because of tha... 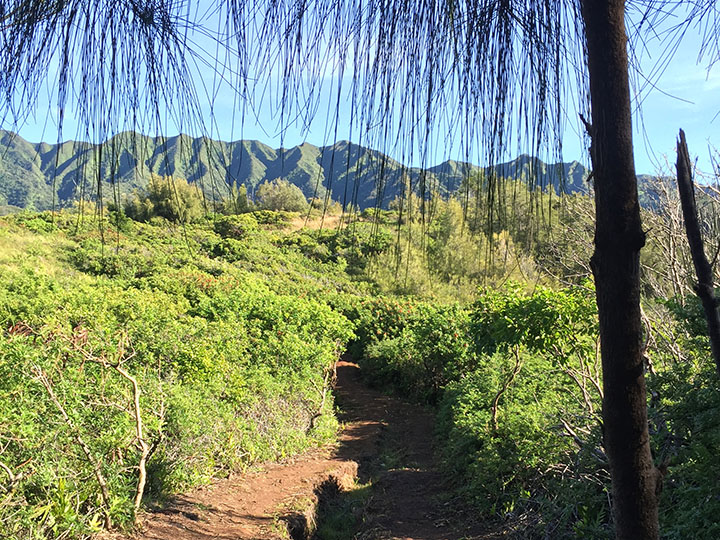 One of the joys about hiking Hawaiiloa Ridge Trail is that it’s never going to suffer the fate of unmanageably overpopulated trails like, say, Maunawili Falls Trail. Because Hawaiiloa is in a gated community that only allows 10 cars in for hiking activities at a time, the trail is bound to be fairly quiet — and therefore peaceful, which after all, is what getting into nature is about.
Furthermore, Hawaiiloa is a well-maintained trail. Stretches of path lined by prickly uluhe ferns are never a... 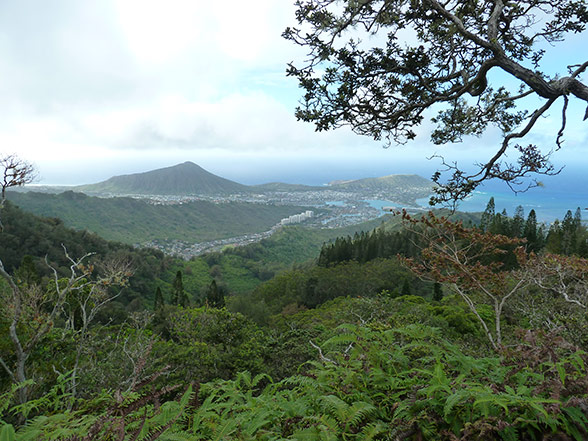 When I wake up pumped for action but with no pre-planned destination for treading my ready feet, I instinctually opt for Kuliouou, a hike I’ve done more times than any other on Oahu. The trail follows a cement road several yards, before veering right onto a marked dirt path. After a few more yards, a sign on the right of the path alerts me to a side trail, all lumpy with rocks, where I begin my ascent. The first half of the trail trudges over boulders and roots, past tall grasses, under the d... 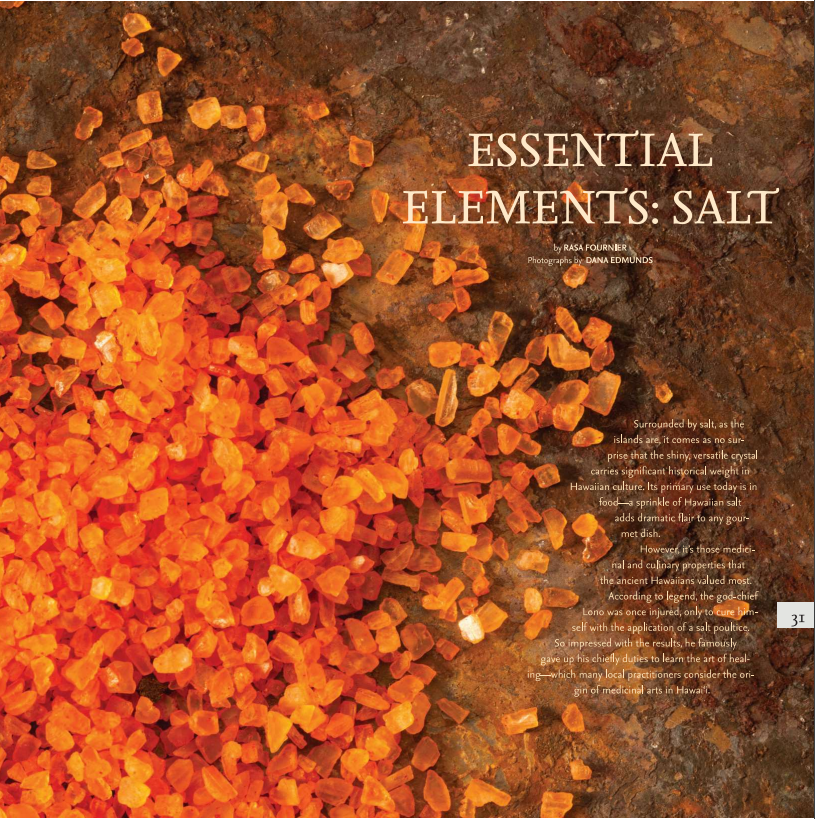 Surrounded by salt, as the islands are, it comes as no surprise that the shin, versatile crystal carries significant historical weight in Hawaiian culture. Its primary use today is in food--a sprinkle of Hawaiian salt adds dramatic flair to any gourmet dish.
However, it's the medicinal and culinary properties that the ancient Hawaiians valued most. According to legend, the god-chief Lono was once injured, only to cure himself with the application of a salt poultice. So impressed with the results, he famously gave up his chiefly duties to learn the art of healing--which many local practitioner 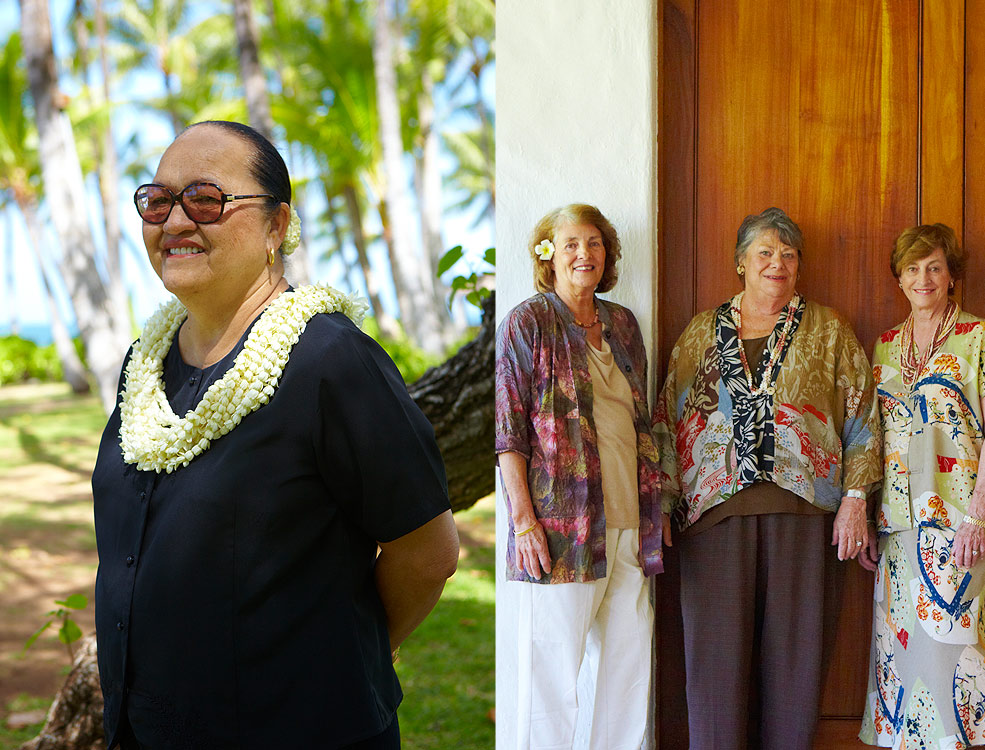 Bridging Heaven and Earth, Nurturing the cultural ties of Lanikuhonua

By Rasa Fournier
Walk past leafy naupaka bushes, hearty laua‘e ferns and into Lanikuhonua—“Where Heaven Meets Earth.” A soft lawn connects two small huts nestled in tropical foliage to a low rock wall fronting a crystal lagoon. Just near the wall, under gently swaying coconut fronds, is Aunty Nettie, attractive in her red mu‘umu‘u patterned with white hibiscus, a red flower in her pulled-back hair. “Welcome,” she smiles.
The scene is like something from a Hawaiian storybook, but then much of ... 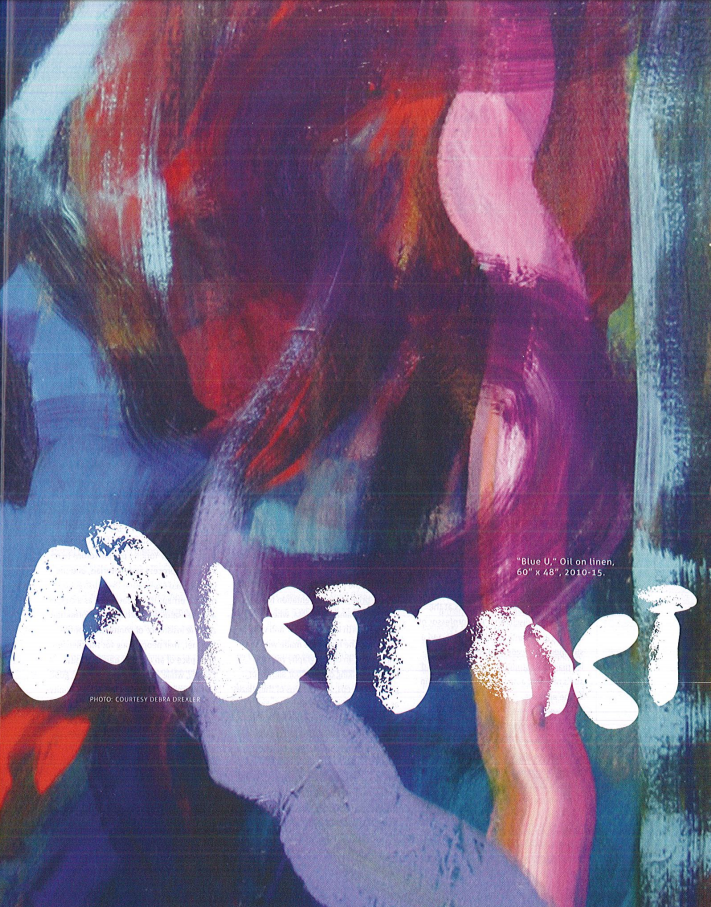 Life in the Abstract

Sit in on a panel of experts discussing abstract art, and it'll be one of the most spirited, involving discussions you may ever witness. Kailua's own resident artist of 19 years, Debra Drexler, exists at the vortex of the discussion. As a professor of drawing and painting at UH Manoa and a summertime resident of New York, Drexler maintains studios in both locales, and she's relishing a new flourish of attention to the abstract.
Displayed on the walls of Van Der Plas Gallery in New York City this past October-November were Drexler's broad strokes in swirls, and layer upon layer of yellow,